What is the film expected to include?:

The above video explains the simple approach to creating a film noir film.

Film Noir has very limited editing required as its shots are mainly continuous. Editing can consist of black and white colour change and limited faded shots.

Shadows are a good way to represent a ‘dark presence’ or villain. The murder scene could be displayed in shadows, or even just a simple cop investigation, following the villain to the victim. Suspenseful music and Jazz, sets the scene well, if the setting is in the CBD. Overall it should be used anyway. Jazz is more suitable however for the CBD, and an increase usage of suspenseful music suits the outer suburbs, or open environment.

A film noir should have a transition from day to night, representing a day passing, and crime occurs at night. Day shots represent the mystery, the detective who follows up on his job, searching, locating the villain character.

A simple approach to editing is suitable for a film noir, a neo-noir would require more editing as it is a ‘re-newed’ version of a film noir, including colour to the typical black and white. An example of this can be viewed in the opening scene of Sin City.

What is your Understanding?

Mega Media: Nobody can dispute the media are powerful institutions in our society.

The media are large money making institutions, they have the potential to wield political influence and shape peoples view of the world and they have significantly influenced the way people think and behave. Example the Wars (WWI, WWII, Cold War, Civil War…ect)

Persuasion: Nor can you dispute the persuasive nature of the media.

Our values and attitudes towards a whole range of issues and people are largely determined by the cultural context in which they have grown up.

Our beliefs shape behaviour towards other people and attitudes towards particular groups and issues. These remain relatively constant, however they mature as you mature and your experiences become more diverse.

The Media DIRECTLY INFLUENCES our beliefs.

Ideology: refers to a shared set of ideas, beliefs and practices that enables a society to function in an organised way. It reflects the values of social groups who have power in a society. It has been described as a ‘collective myth’ because we draw from traditional ideas and stories when we think about groups of people or particular subjects. Even those ideas are no longer valid, we still tend to draw on the mythology rather than our knowledge of the way things really are.

Mythology: The complexity of the original story is lost through continued retelling until the myth has a simple, clear message that appears to be an eternal truth. It refers to the stories that the shape the way we see ourselves and our culture. The originate in truth but as they evolve they are characterised as much by what is not said as by the message itself.

Discourse: refers to a set of assumptions of a framework that shapes how we understand and respond in society. The social importance reflects the different ways that audiences think. The assumptions you make within a particular discourse reflect your beliefs and values and your ideological position on issues. In media terms this is referred as: Demographical Discourse.

We are born into the life of the world as the media provides a constant reinforcement of our ideology through events, both legitimising it and making it seem the natural way of doing things in our society and lives. 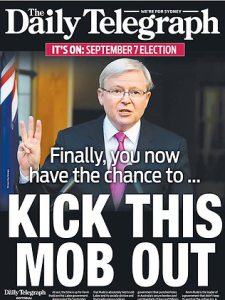 -1877: Eadweard Muybridge develops sequential photographs of horses in motion. -> This was more along the lines of film development.

-Films/documentaries developed from Lumier brothers dating back in 1895. They would film every day life, people going to work, trains passing by and so on…

-1926: – John Grierson (1898-1972), a young Scottish academic pursuing an interest in mass communications in the US, writes a review of Robert Flaherty’s ethnographic film Moana for the New York Sun (February 8, 1926). In the review he coins the term “documentary.”

-1935: German filmmaker Leni Riefenstahl is commissioned by Adolph Hitler to film the annual Nazi Party rally of 1934. The resulting film, Triumph of the Will, is a landmark both in documentary technique and in the use of film as an astonishingly powerful propaganda medium.

-In 1960 Robert Drew Associates produces Primary, the first film in which the sync-sound motion picture camera is able to move freely with characters throughout a breaking story (John F. Kennedy and Hubert Humphrey in the 1960 Wisconsin Democratic presidential primary). Primary is widely regarded as the earliest example of American “Direct Cinéma .”

Selected Videos by Robert Drew and Associates in the Media Resources Center:

-1965: Sony introduces the first consumer 1/2-inch video tape recorder. Philips introduces the compact cassette for consumer audio recording and playback on small portable machines. -> This allows everyone to be able to construct a doco of their own.

The French used the term documentary to refer to any nonfiction film medium, including travelogues and instructional films. The earliest “moving pictures” were, by definition, documentaries.

Modern documentaries have some overlap with television forms, with the development of “reality television” that occasionally verges on the documentary but more often veers to the fictional or staged, a mockumentary.

What are the different types of Documentaries: